Upon initial log in, all users will receive an "Opt In" notice.  This allows Kahua to collect information to address performance issues and improve the overall user experience. Information captured includes your account name/email, type of device, login data and the context around any errors or exceptions you receive while using the application. We DO NOT capture any business data or track your usage patterns as part of this program. This setting can be changed at any time in My Settings > General by toggling the Diagnostics Enabled switch. 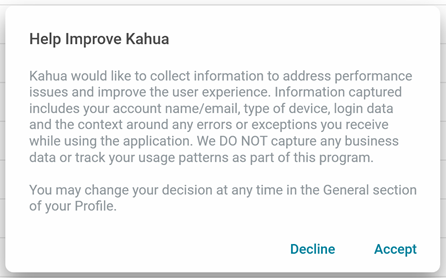 The operations available for the Groups app have been updated.  We have introduced an "Edit Members" operation, which grants the ability to change the membership of a group but does not allow making changes to permissions.  This operation is available to the Contributor and Administrator roles.  With this change, only users with Administrator permission for Groups can create new groups and update permissions.  Additionally, the "Folder Administrator" role was relocated to the File Manager section.  The Folder Administrator role is typically granted on an individual folder to allow users with this level of access to administer specific subfolders in the folder hierarchy.

Access to the View Definition modal has been moved into the View Selector menu. The manage modal has been restyled to match the new Kahua user interface. A new section, Indicators (described below), has been added. A brief tutorial is displayed the first time the "Manage Views" action is invoked.

End users can flag records using Indicators in logs based on specified criteria (e.g., Due Date is in the past). Once defined, the indicator will appear as a colored bar at the far left side of the row in a log with hover text to display the Indicator name. Users can add as many indicators as desired per view.  Indicator colors are configurable, and indicators can be turned on/off as desired. 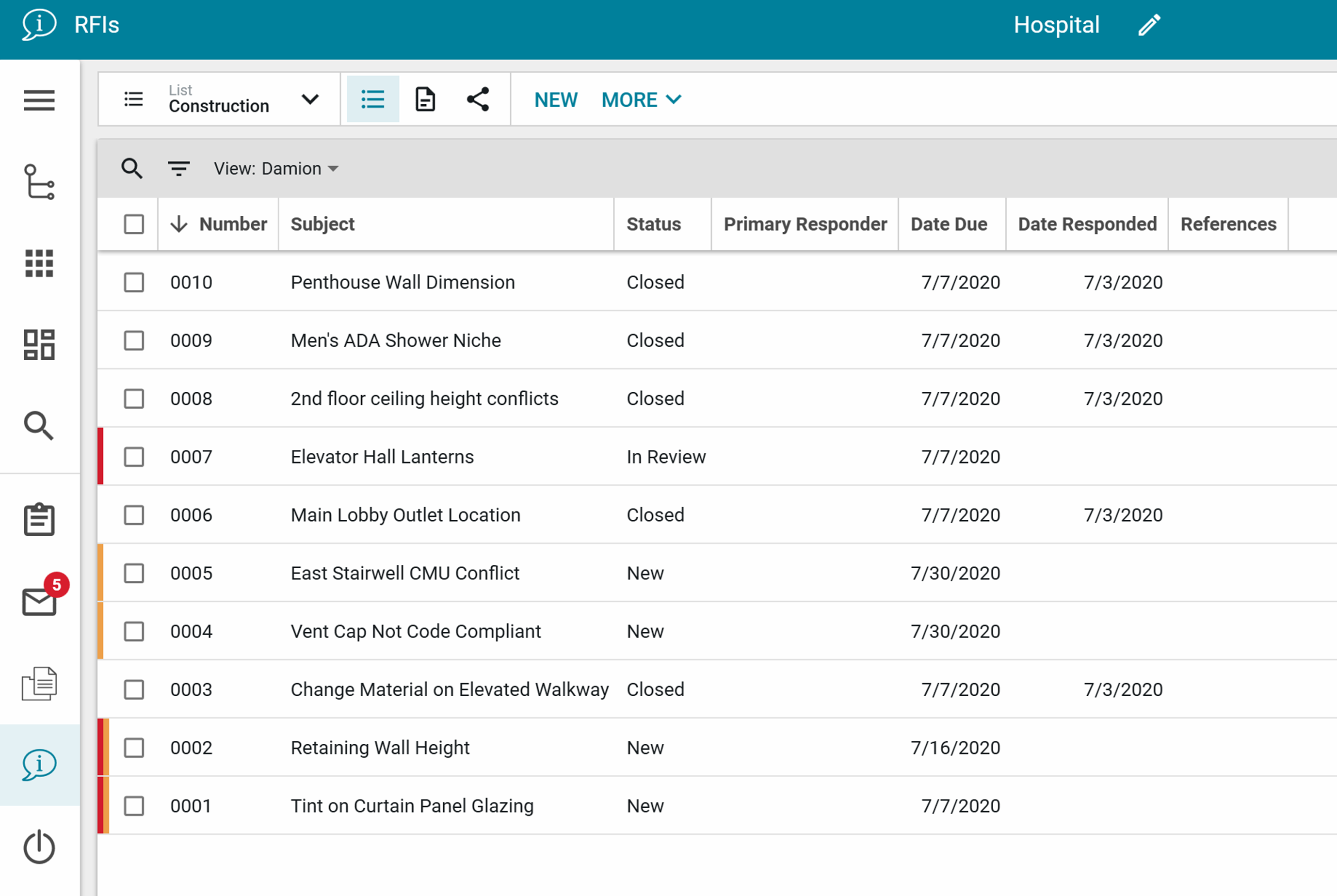 The "Invite To Kahua" action, found in several apps such as Contacts and Project Directory, has been updated to prevent inviting internal users using this method.  This action is intended to be used for inviting users outside of your organization.  When invoking this action on a contact that is associated with a company selected in Company Profiles app, users will be instructed to set up the new user in the Users app. 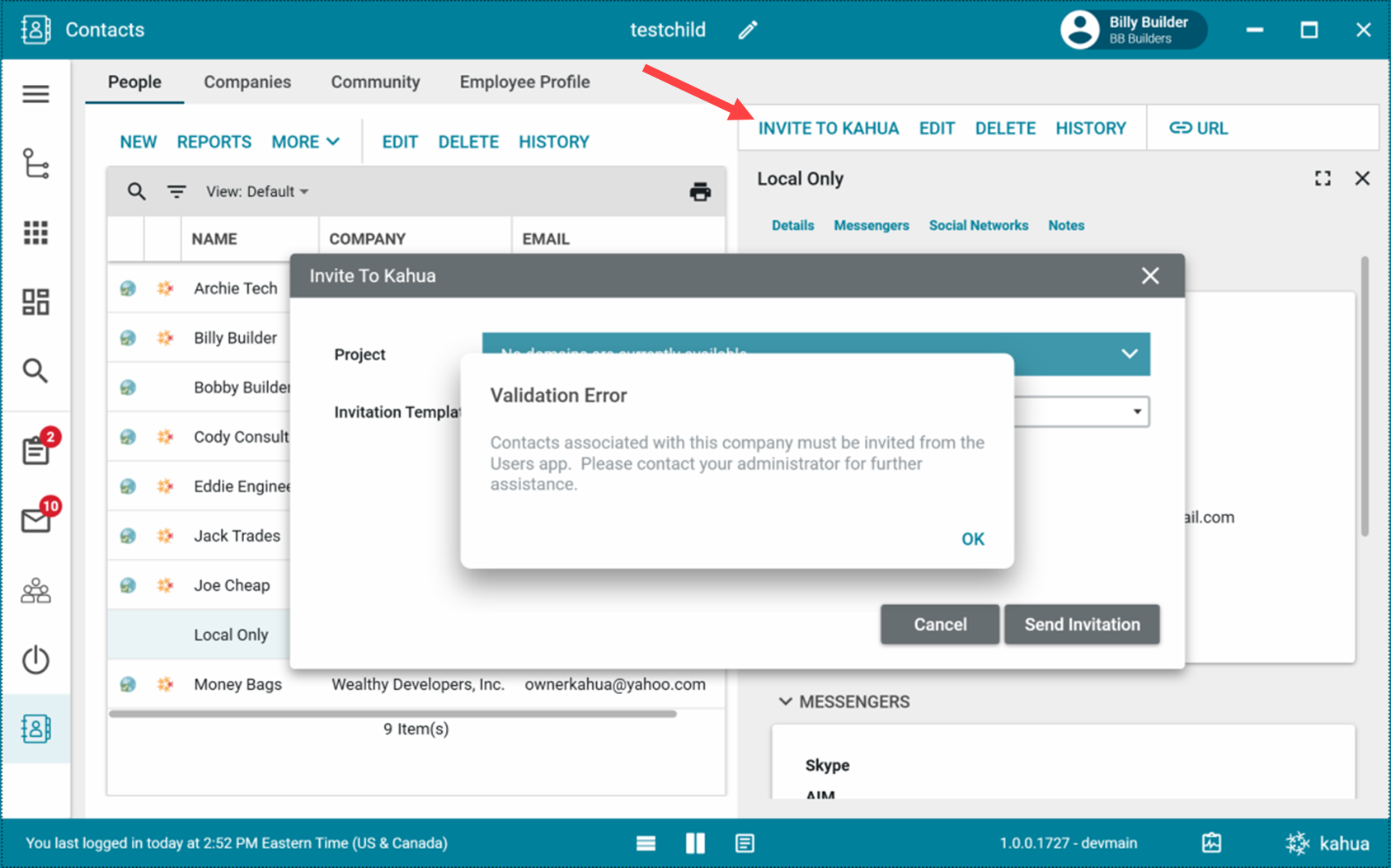 We have added 3 user definable Lookup and Text attributes to the Contacts>Companies app. These attributes can be relabeled to meet your specific business purpose.  To set them as visible and update the label, open the Configuration app at the domain root to the Companies application. Once visible, they will appear for on the Preview and Edit views within the Companies app. 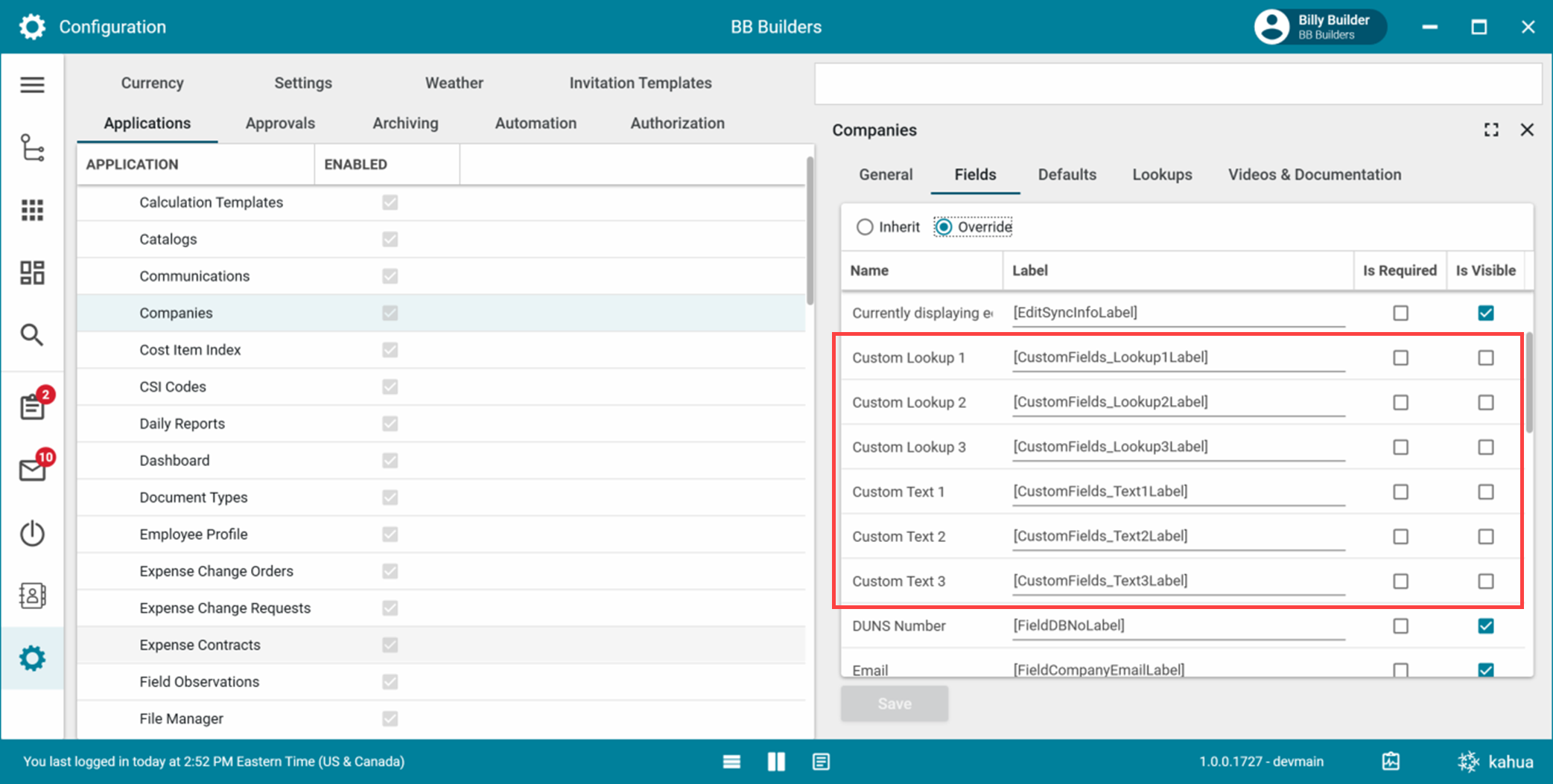 Now when selecting a file in File Manager, the panel displays the file immediately in the viewer without having to load the metadata first.  Users that are interested in the metadata can still access it by selecting the Details tab.  This change will reduce the number of clicks users need to perform to get directly into the actual file content.  Files that have not completed rendering or are not a viewable file format, such as MP3, will open to the Details tab. 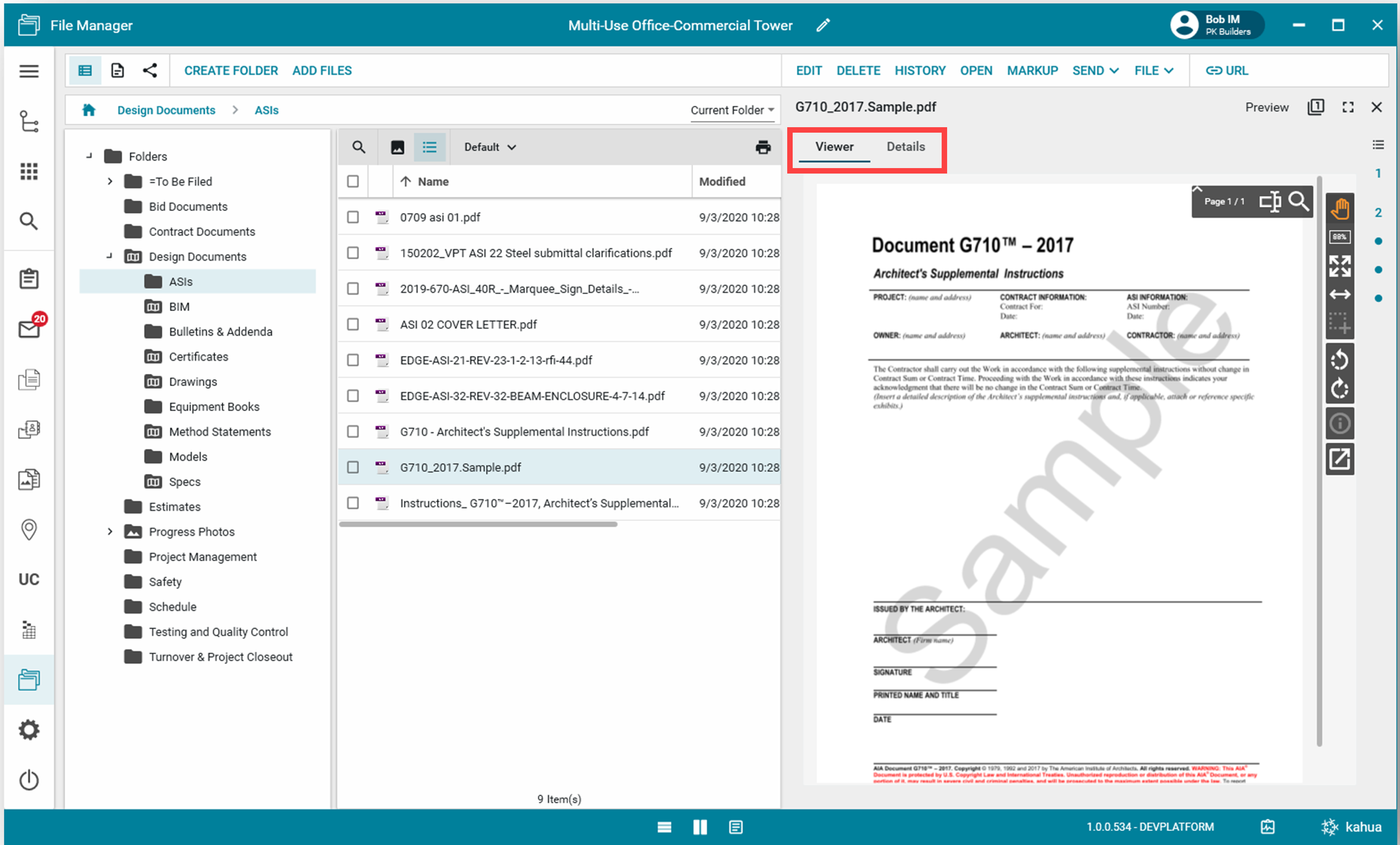 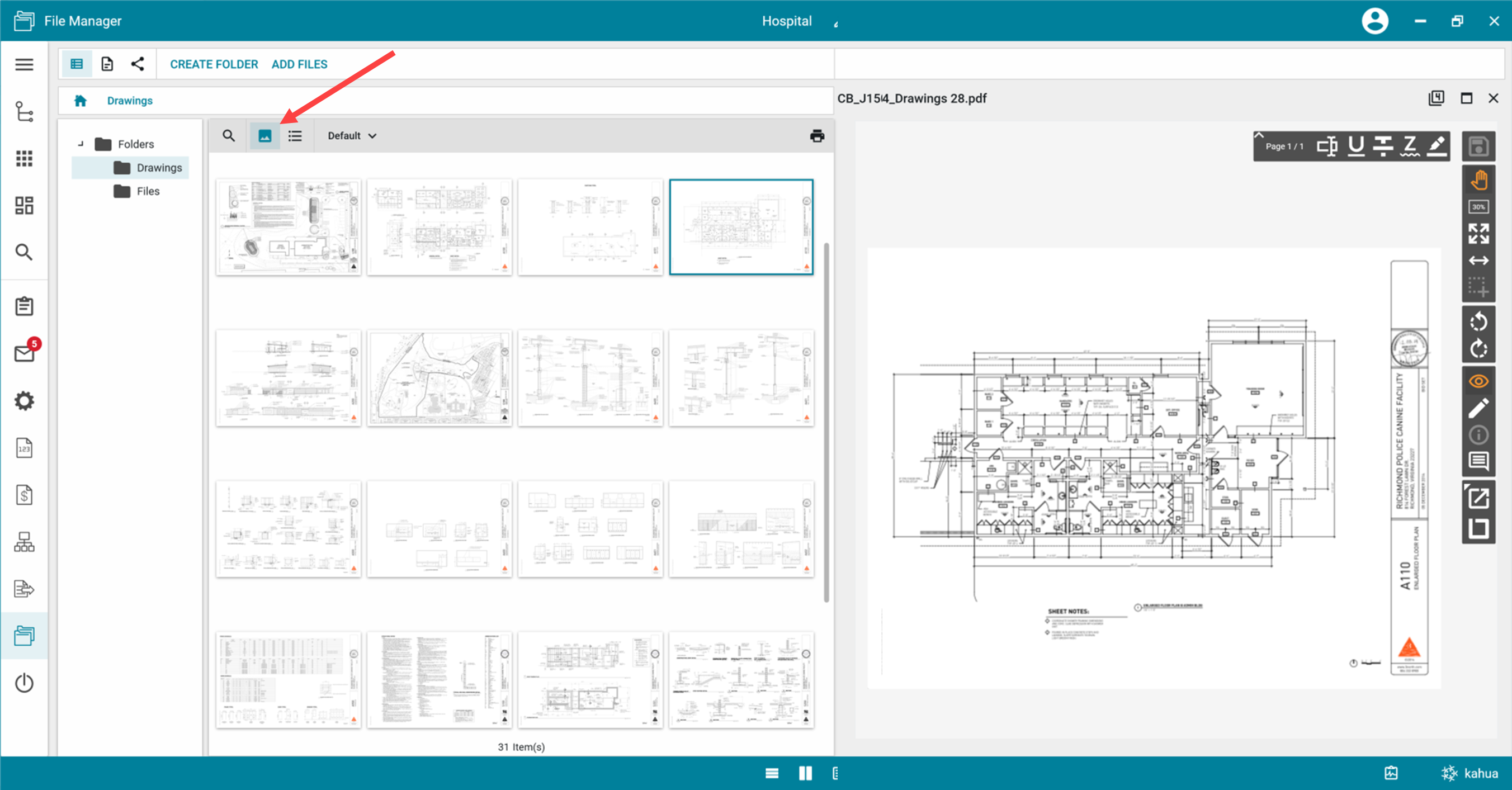 This feature provides the ability to view and take action on files that span File Manager’s folder hierarchy, by having the content represented in a single consolidated cross-folder view.

Selecting the toggle displays a view of all content from the currently selected folder as well as from all associated subfolders. Invoke this action from the top level "Folders" folder to see files for the entire project.  This eliminates the need to dig through numerous subfolders to find content nested beneath a parent folder or in other parts of the folder hierarchy.

For instance, users may be able to view all images in a single list regardless of where those images sit in the folder hierarchy.  Users can easily switch back to the standard ‘Current Folder’ mode from the new ‘Subfolder’ mode.

Because Kahua supports the concept of a ‘Folder Type’ (each with its own associated actions, attributes, and workflow), File Manager also supports a ‘Subfolder’ mode for all current and future ‘Folder Types’ (e.g. Files, Media, Drawings, Specifications, etc.).

For all 'Subfolder' modes, "Create Folder" is the only action that is available.  Other actions, such as "Add Files", etc. are removed from the 'Subfolder' modes since the action would not be able to infer which folder to apply the action to.  Note however that context-driven (right-click) folder-level actions remain unchanged since it remains clear which folder the action applies to even when in 'Subfolder' mode.  Once a file has been selected, you’ll be able to perform all the same file/record actions that up until now have only been available while within a specific folder.

In summary, ‘Subfolder’ mode enables you to perform actions such as: 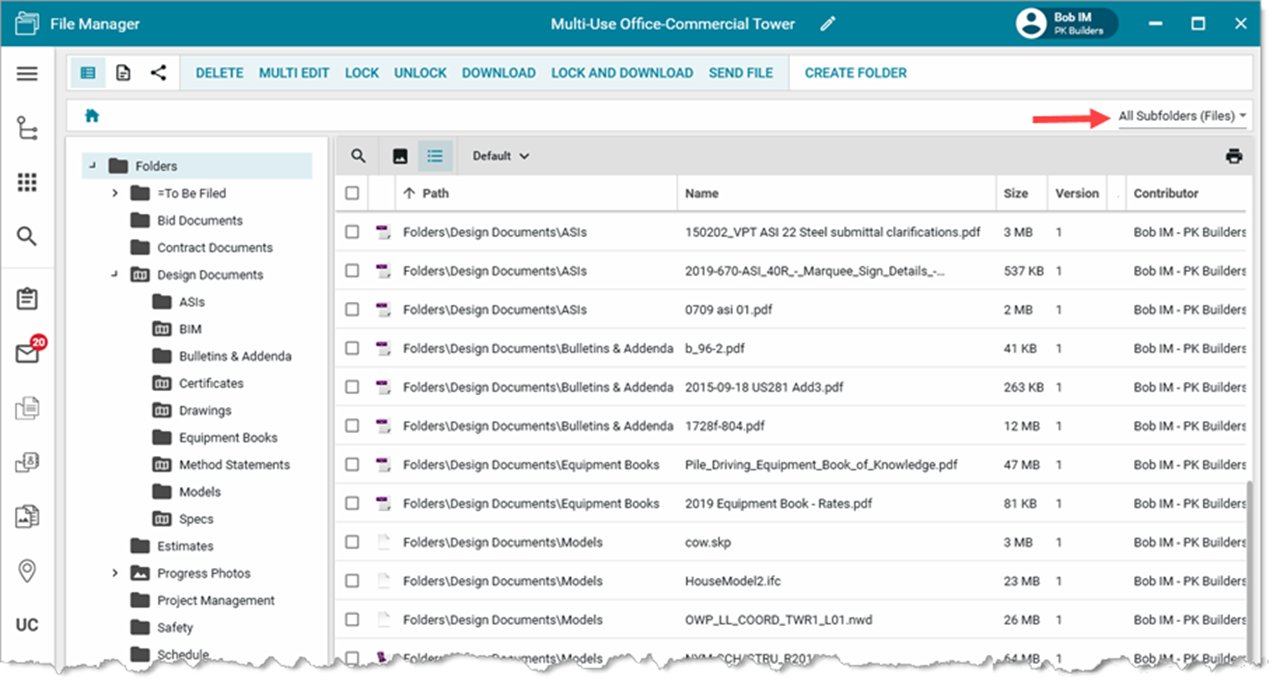 There are two new attributes associated with every file/record in File Manager that can track a document’s ‘Retention Expiration’ per a pre-determined ‘Retention Policy.  These attributes may be configured / defaulted in configuration by those with permission to Configure the File Manager application.

We have added the ability to drag and drop photos from your desktop directly into the to Media Manager app.  And now, when deleting an image from Media Manager, it is also removed from its source record.

When selecting other Kahua docs to add as references, a preview of that document is displayed to help users find the correct one. 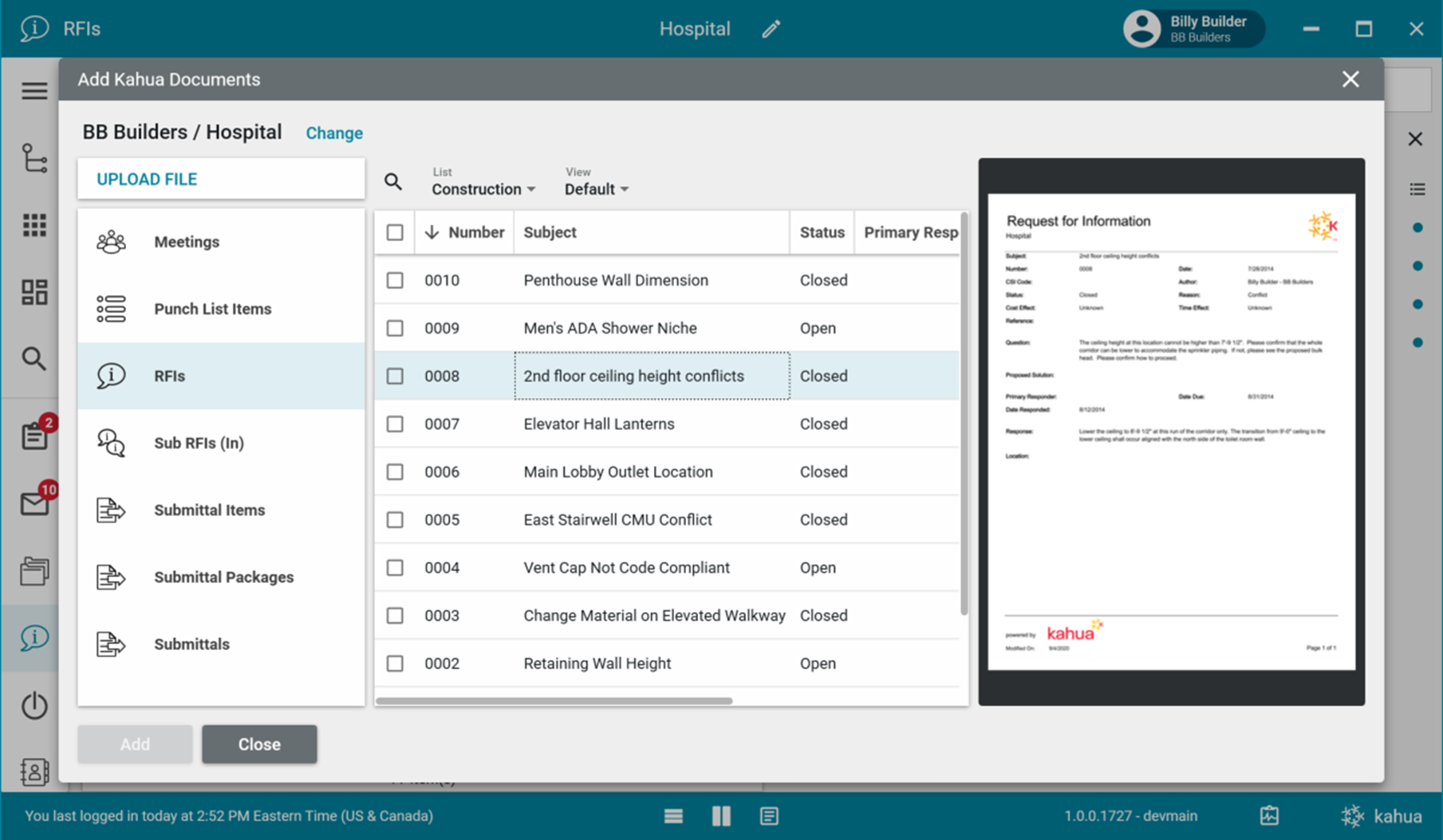 The file upload dialog has been restyled to a more modern theme.  Additionally, when uploading restricted or hidden Windows files into Kahua, the file shows a warning indicator along with hover text explaining why the file was not uploaded. 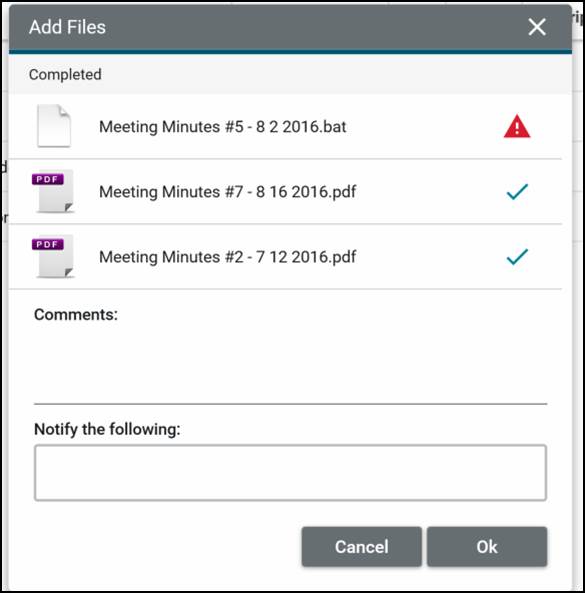 The Work Breakdown application has been updated to match new UI style and address various application limitations. New additions include Show Rows with Values checkbox and collapsible sections in the items detail panel. Various bugs have been addressed.