For users that frequently change projects, Kahua has added a way to quickly jump between projects.    When right clicking on the Project Finder icon, users can choose to "Display My Projects".  This will open a panel to the left of the application bar with a list of any project that have been starred by the user.  Clicking a project from the panel will set the selected project as the current active project and open the most recent app.  To conserve real estate, it is recommended that users who remain in the same project on a daily basis keep this panel closed. 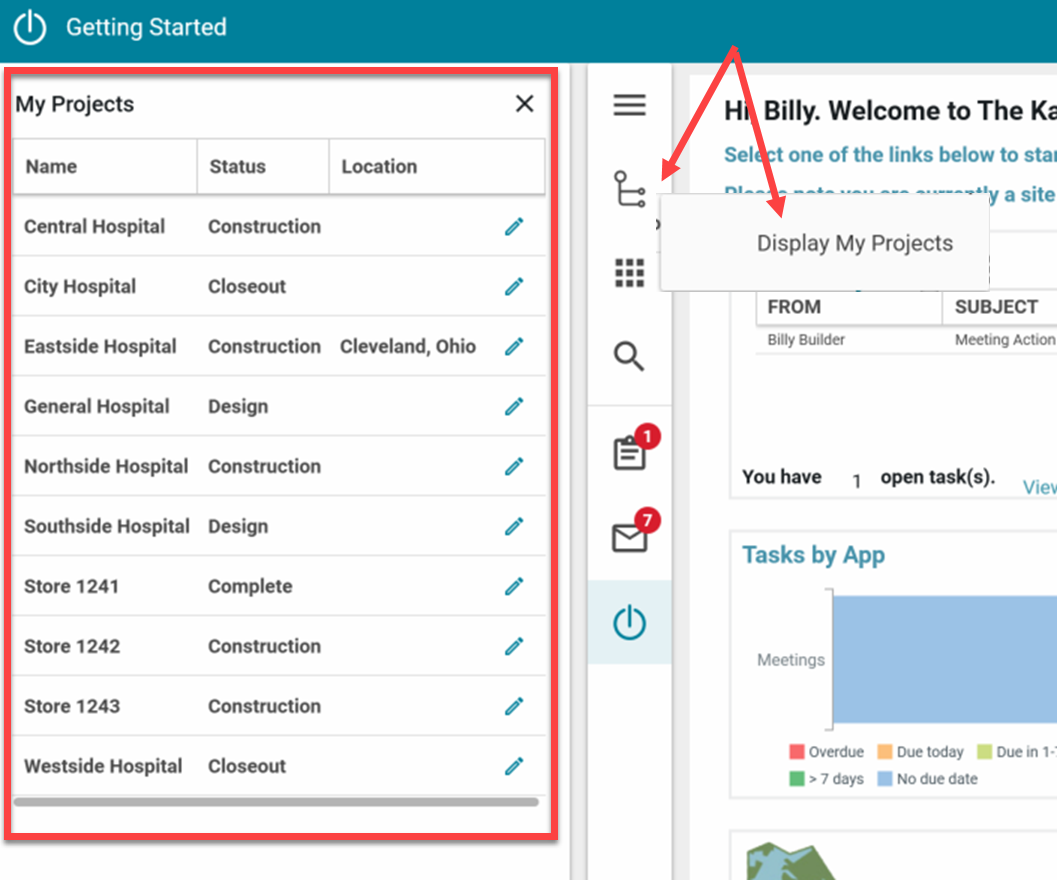 The Contributor role in File Manager has been updated to permit deleting their own uploaded files. This change was made to alleviate accidental file uploads by users, particularly via drag/drop or file sync.  A contributor will now be able to delete a file provided it is unchanged since the upload occurred and the following conditions are met:

1.    The user is the individual who uploaded the file

A new component has been introduced that offers specific handling for photos.  The component allows for ease of upload of photos via drag and drop as well as better visuals and navigation for image files.  It is recommended that users leverage the Media Component instead of the References Component when dealing with photos.  Additionally, attributes have been included that allow specific data to be collected about each photo, including Location, Photographer, Comments, etc.

Images added to Media can be included on your portable views. To do so, the app must use a Microsoft Word template that includes the following token:
[Media(ItemsPerRow=4)]

Note:  The parameter above can be adjusted to include as many items per row as desired and the image on the portable view PDF will resize accordingly to span the width of the page.

In upcoming releases, the Media component will be added to other apps and enhanced to support annotations, videos and other exciting new functionality.  In addition, a new central repository for all Media will be included for all projects.  The Media Component is initially available to customers using the base Daily Reports app or the Kahua extension.  If you have a custom extension in any app and would like to include the Media Component, please contact your Kahua Account Manager or a Partner developer. 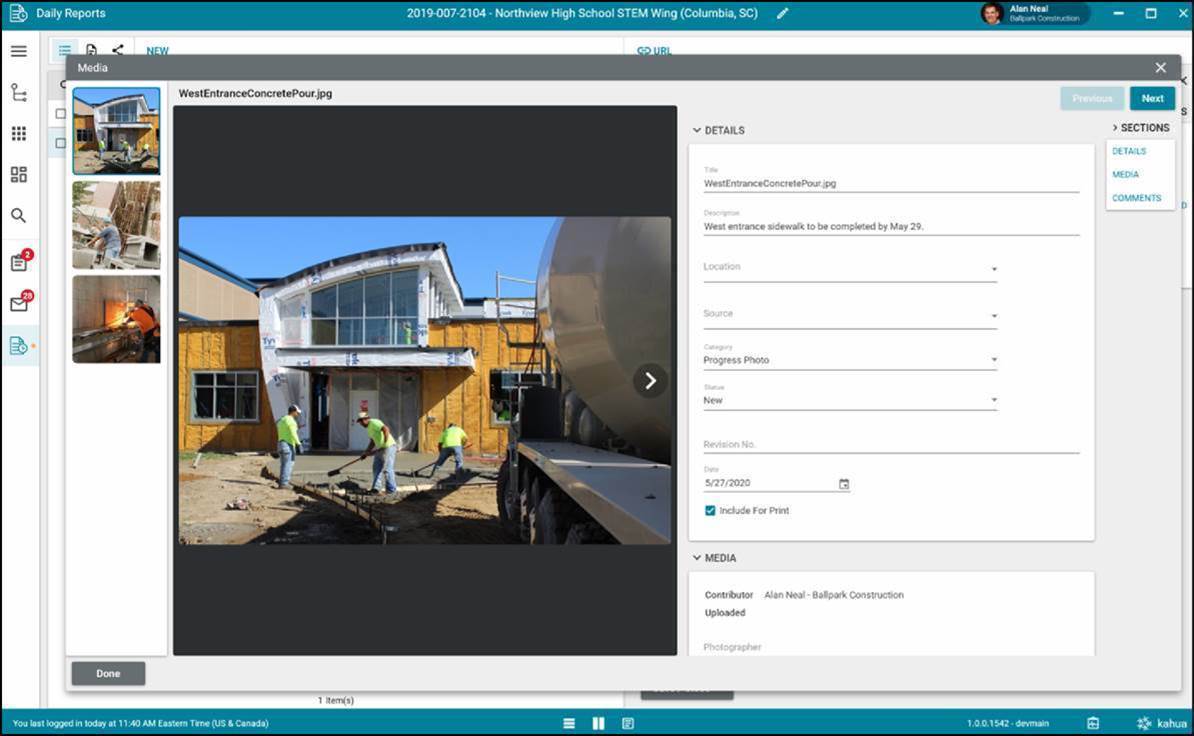 References:  Uploaded files will be accessed via a link in the invitation email. 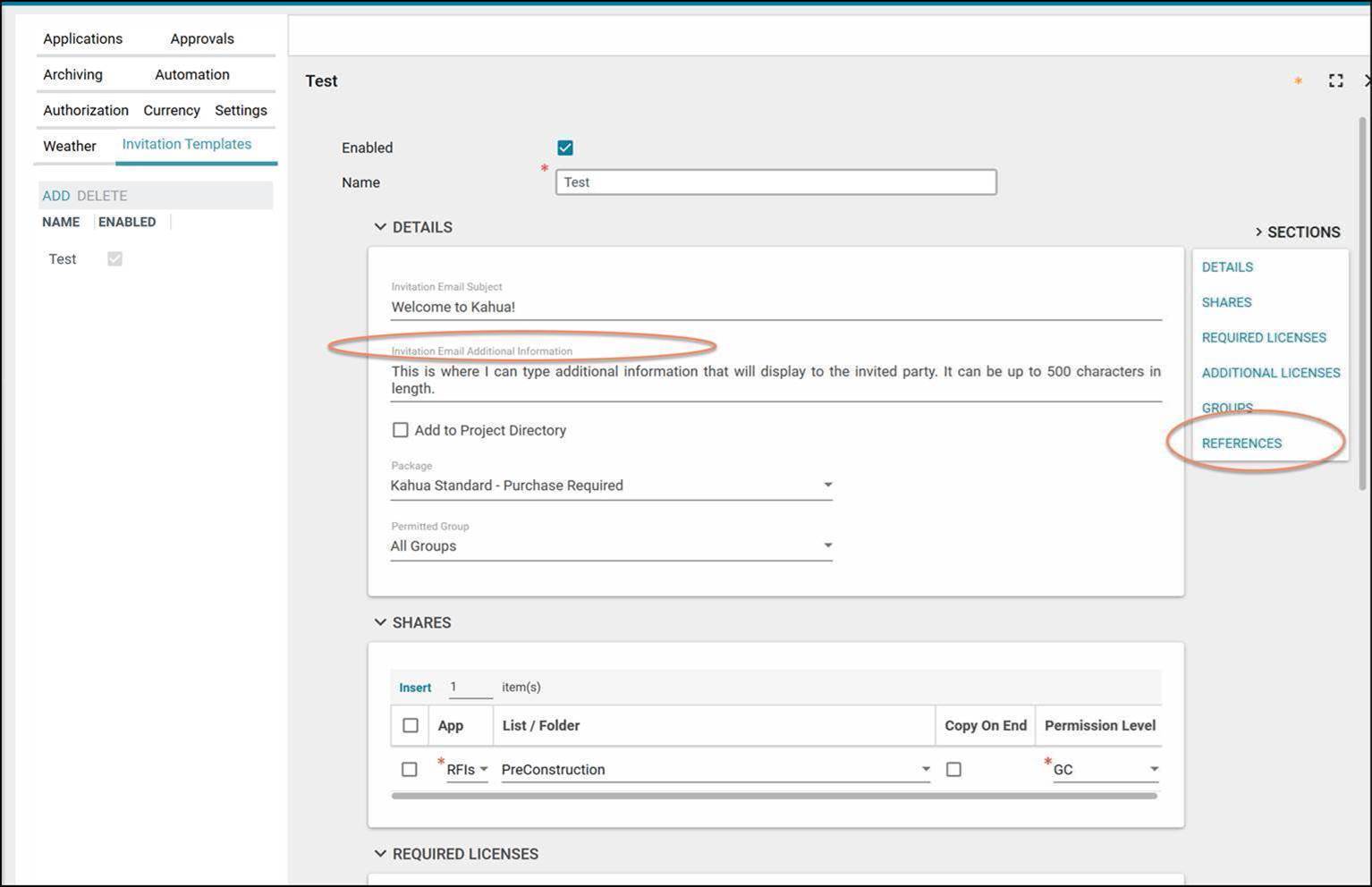 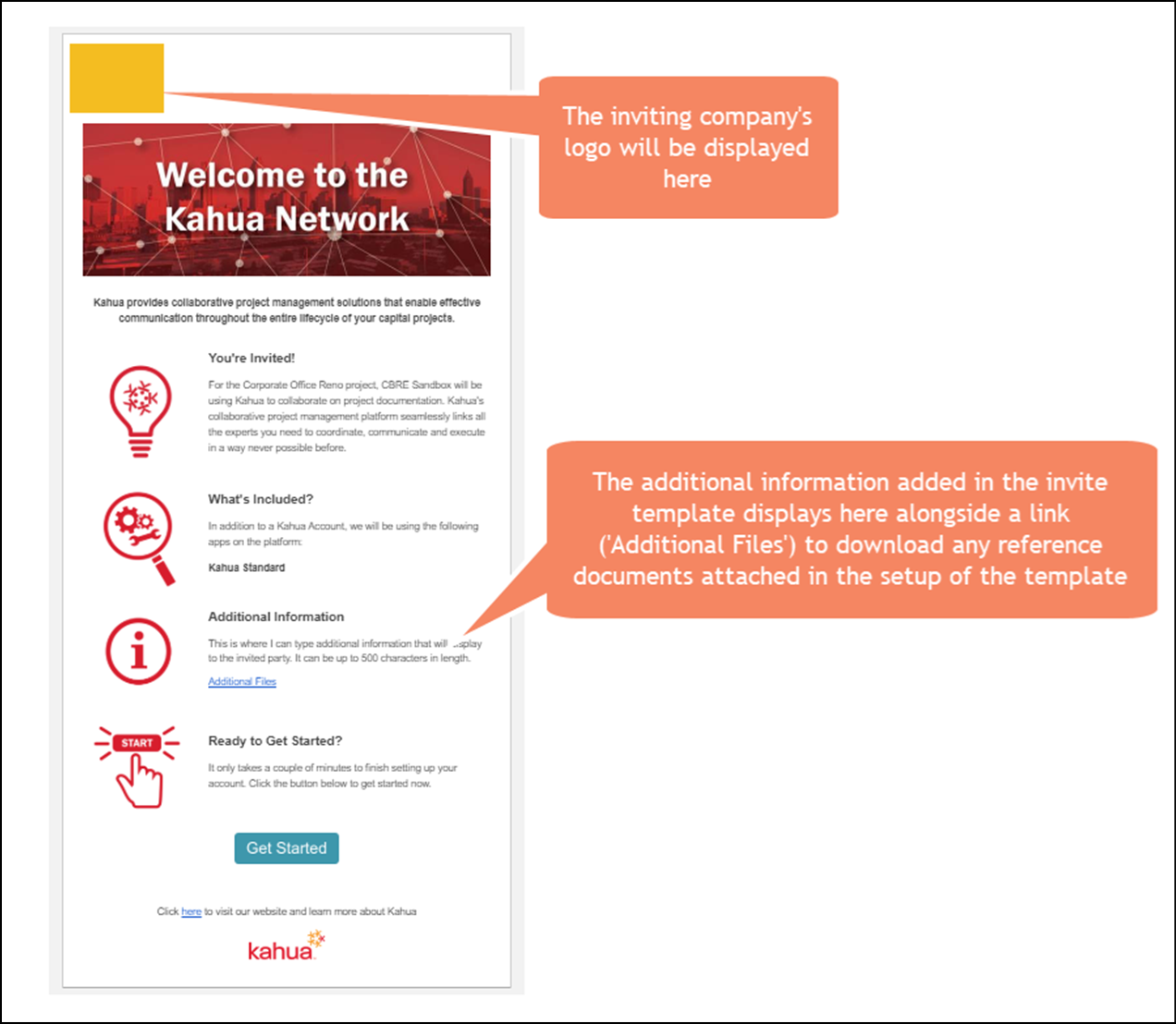 Users who would like to include the ability for DocuSign signers to include text or select a checkbox can now optionally include this with their signature request.  For more information and sample tokens, please visit our DocuSign Autoplace Tokens support page.

We have made some adjustments to the standard canned reports and portable views to provide a more modern look and feel.

Our Mac host will move towards parity with the Windows app, including update of the below. The New UI for the Mac host will continue through future releases as well. 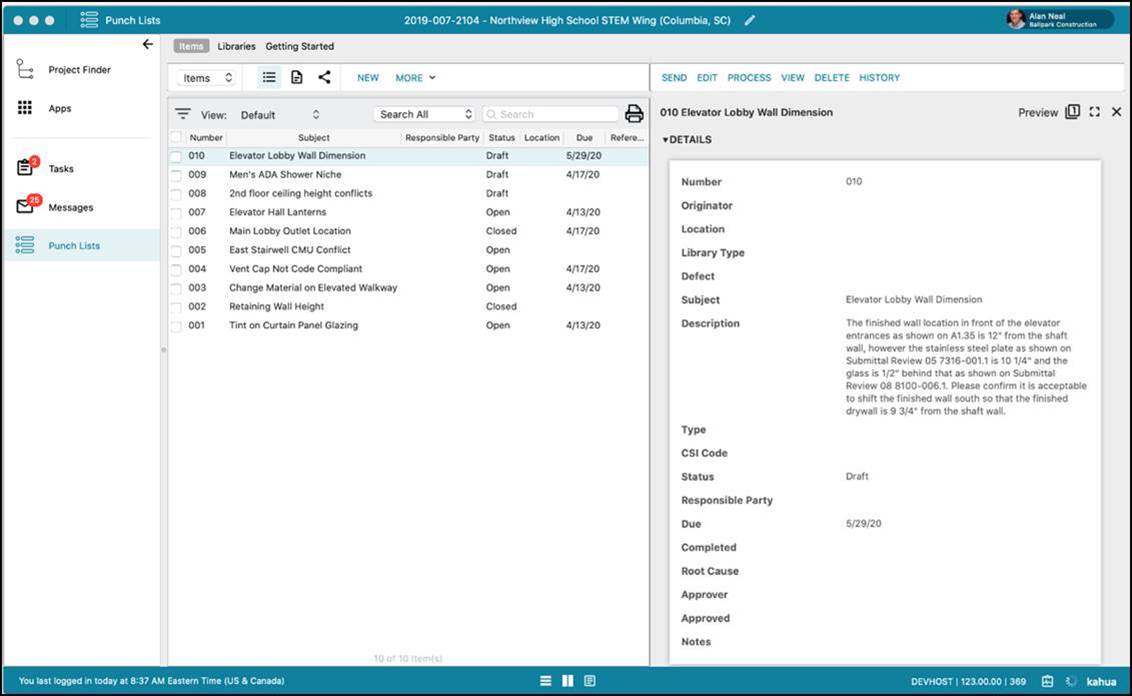 Kahua’s new Media Component for mobile allows users to take, upload and view photos in applications that contain the component. The component, when added to the app def, supports a thumbnail and full size layout of photos in a separate section within supported apps.

A new, consolidated Actions and Commands bar streamlines acting on a record. Workflow buttons that often scroll horizontally have been eliminated. All options are now provided on the bottom task bar with a ‘More’ menu to access additional actions that are unable to fit on screen. 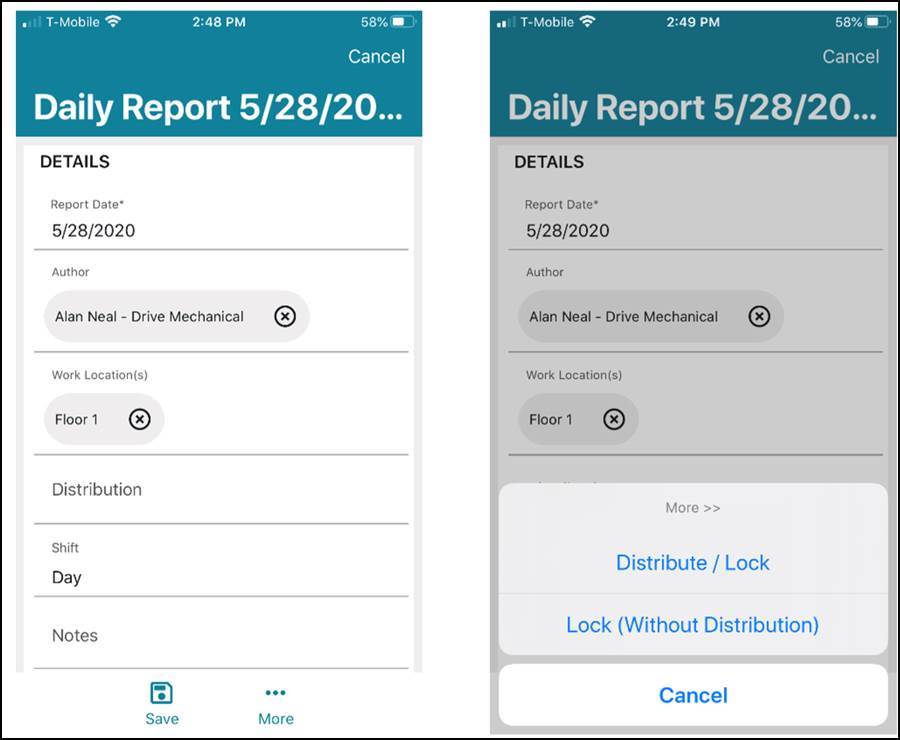 Apps that contain secondary grids on a form have been updated with a simplified interface that includes swipe left/right to easily navigate between records.